Key findings and implications of the study

Autism spectrum disorders (ASDs) are a group of neurodevelopmental disorders with core symptoms of impaired social interaction and communication, and restricted interests and repetitive behaviors, with prevalence rate estimated at ~1%. The X-linked neuroligin 3 (NLGN3) gene encodes the neuronal postsynaptic adhesion protein NLGN3, which interacts with presynaptic neurexins (NRXNs) to induce synapse formation. NLGN3 is one of the best-known sociality-related genes, with various mutations including deletions and point mutations linked to ASDs. However, how NLGN3 protein regulates social development and how mutations in the NLGN3 gene cause ASD remain unclear.

Receptor type protein tyrosine phosphatase δ (PTPδ) is known as a presynaptic adhesion protein inducing synapse formation through interactions with various postsynaptic binding partners. In this study, systematic screening of postsynaptic binding partners for PTPδ during the period of synapse formation identified NLGN3 as a novel ligand for PTPδ to induce inhibitory (GABAergic) synapse formation. PTPδ competes with NRXNs, classical binding partners of NLGN3, for binding to NLGN3. The competition mechanism between PTPδ and NRXNs for the NLGN3 binding was revealed by X-ray crystallographic analysis of the NLGN3-PTPδ complex (Fig.1). Based on the atomic-level comparison of NLGN3–PTPδ and the reported NLGN1/4–NRXN1 binding interfaces, NLGN3 point mutations were designed to selectively impair the NLGN3–PTPδ or NLGN3–NRXN interactions. The gene-edited mice carrying the Nlgn3 gene mutations that selectively lack NRXN-interaction spent more time interacting with other mice during social testing periods, suggesting increased sociability. In contrast, the gene-edited mice with Nlgn3 gene mutations selectively impairing the PTPδ-interaction exhibited decreased sociability as indicated by a lack of social preference and increased defensive behaviors. In fact in the synaptic fractions of mouse brain, PTPδ and NRXNs compete with each other, and more NLGN3–PTPδ complex was formed in the mutant mice lacking the NLGN3–NRXN interaction. These results suggest that the more the NLGN3–PTPδ-mediated synapses are formed (or the less the NLGN3–NRXN-mediated synapses are formed) in the brain, the more sociality develops. On the other hand, the less the NLGN3–PTPδ-mediated synapses are formed (or the more the NLGN3–NRXN-mediated synapses are formed), the less sociality develops. Therefore, the proper balance between the NLGN3–PTPδ-mediated and NLGN3–NRXN-mediated synaptogenesis during brain development seems to be required for proper social development (Fig.2).

The global prevalence of ASD is increasing and difficulties in interpersonal relationship in social groups have become an issue recently. This study revealed that the development of sociality is regulated in part through a balance of two different types of synaptogenic protein interaction, NLGN3–PTPδ and NLGN3–NRXN interactions. The identification and characterization of the neural circuits and synapses shaped by the competition between PTPδ and NRXNs in certain brain regions will help to understand the circuit basis of social development and ASD pathogenesis. Furthermore, selective blockade of the NLGN3–NRXN interaction or facilitation of the NLGN3–PTPδ interaction would be an attractive interventional target in ASD therapy and drug discovery. 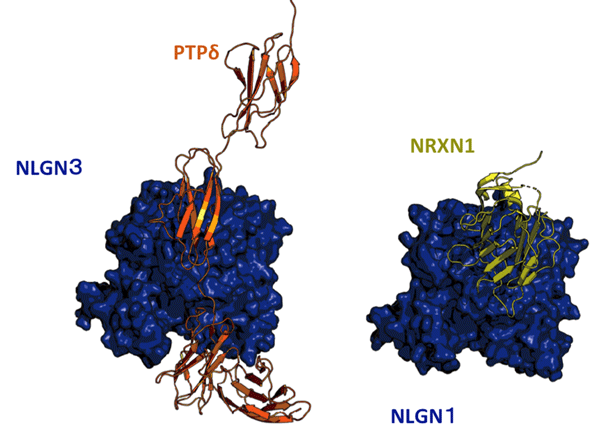 Fig. 1. Structure of NLGN3–PTPδ complex
Structure of NLGN3 (blue)-PTPδ (orange) complex determined in this study is on the left. Reported NLGN1 (blue)–NRXN1 (yellow) complex is on the right. NLGN3 and NLGN1 are structurally homologous and placed in a same configuration. PTPδ and NRXN1 bind to the similar position of NLGN proteins, leading to competition between NRXNs and PTPδ for binding to NLGN3. 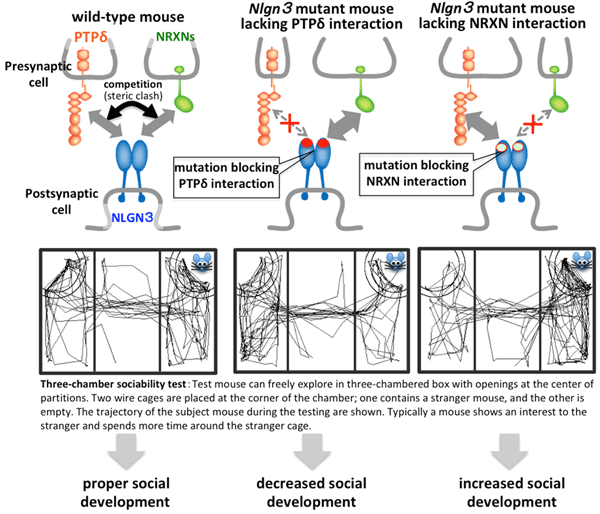 Fig. 2. Regulation of social development by NLGN3
Postsynaptic NLGN3 interacts with either presynaptic PTPδ or NRXNs to induce synapse formation. PTPδ and NRXNs compete with each other for binding to NLGN3 due to steric hindrance (top left). In social behavioral test, wild-type mice spend more time around the cage containing stranger mouse than around the empty cage (left). Mice carrying Nlgn3 gene mutations that lack NLGN3-PTPδ interaction spent less time around stranger cage (middle) and did more time around empty cage, indicating decreased sociality. In contrast, Nlgn3 mutant mice impairing NLGN3-NRXN binding exhibited increased sociability as indicated by longer interaction time with stranger mouse (right). These results suggest that the balance between NLGN3-PTPδ-mediated synapse formation and NLGN3-NRXN-mediated synapse formation in the brain is critically important for the development of sociality.

Canonical versus non-canonical transsynaptic signaling of neuroligin 3 tunes development of sociality in mice.