Infantile Hemangioma and the Risk Factors in a Japanese Population: A Nationwide Longitudinal Study—The Japan Environment and Children’s Study

Infantile Hemangioma and the Risk Factors in a Japanese Population: A Nationwide Longitudinal Study—The Japan Environment and Children’s Study

The research group headed by Megumi Mizawa, Lecturer, Department of Dermatology, Faculty of Medicine, Academic Assembly, University of Toyama, has revealed the incidence of infantile hemangioma (IH) in Japan and five environmental risk factors for IH using data from the Japan Environment and Children’s Study (JECS), a large-scale nationwide epidemiological study. The incidence of IH in Japan shown to be 0.72%, lower than the rates reported from other countries. IH was also found to be related to the maternal lifetime incidence of allergic conjunctivitis and pollinosis, female sex, use of reproductive medicine and gestational age.

IH is the most common vascular tumor of infancy. It is typically absent at birth but, undergoes a phase of increased cellular proliferation followed by an involution phase and ultimately regresses with time. The incidence of IH in mature neonates was reported to be approximately 4.5% in other countries. To our knowledge, there have been no large-scale studies of a representative infant population. In the present study, we evaluated the incidence of and environmental risk factors for IH using data from the Japan Environment and Children’s Study (JECS), a large-scale nationwide epidemiological study.
The 85,244 total mother-infant pairs selected for the analysis included 613 infants with IH. The incidence of IH at 1 year old was 0.72%, which was lower than has been reported from other countries. The incidence of IH in Japan is reported to be 0.78% (Hidano A, et al.: Br J Dermatol. 1972;87:138), and the incidence found in our study was similar to this previously reported value.
The known risk factors for IH include female sex (1), the use of in vitro fertilization (2), gestational age (3), previous deliveries (4), pregnancy complications (5), labor complications (6), advanced maternal age (7) and low birth weight (8) (Figure). In our study, female sex (1) and the use of reproductive medicine (2) were also significantly associated with IH. A low birth weight (8) was not significantly associated with IH; however, the risk of IH decreased by 9% for every week of gestational age (3). Hypoxia is considered the trigger of angiogenesis that leads to the formation of IH. Various conditions that predispose an infant to the development of IH (i.e. preterm birth, low birth weight) are associated with hypoxia. Furthermore, it has recently been suggested that the renin-angiotensin system may play a role in endothelial cell proliferation in IH. Higher renin levels have been detected in females than in males as well as in premature births, all of which are risk factors for IH. Interestingly, the maternal lifetime incidence of pollinosis (9) and allergic conjunctivitis (10), which cannot be explained by hypoxia, was identified as a significant risk factor for IH. The potential link between IH and the maternal lifetime incidence of pollinosis and allergic conjunctivitis warrants further investigation. 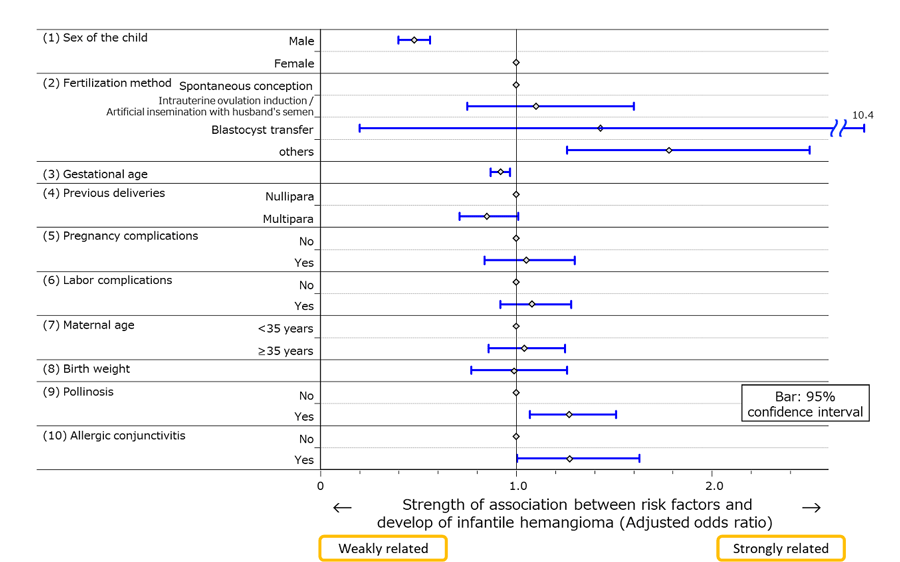 The findings and the conclusions of this article are solely the responsibility of the authors and do not represent the official views of the Ministry of the Environment, Japan.