A research group led by Kenta Matsumura, Lecturer, Department of Public Health, Faculty of Medicine, University of Toyama, has revealed that higher maternal intake of omega-3 polyunsaturated fatty acids (PUFAs), such as docosahexaenoic acid (DHA) and eicosapentaenoic acid (EPA), during pregnancy was associated with fewer cases of infant maltreatment (hitting the baby, shaking the baby very hard, and leaving the baby alone at home) in the first 6 months after delivery. This finding, revealed by analysis of a large dataset obtained from the Japan Environment and Children’s Study (JECS), indicates the potential applicability of omega-3 PUFAs in reducing infant maltreatment.

A 2017 UNICEF report states that 300 million (3 in 4) young children worldwide are regularly subjected to maltreatment by their caregivers, which can result in injury, serious sequelae, and even death. Although various psychopathological, socio-economical, and environmental factors are known to contribute to the maltreatment of children by their mothers, addressing many of these factors through intervention can be difficult.

One potentially protective factor that could easily be targeted in intervention, but has currently received little attention, is maternal intake of omega-3 PUFAs. Omega-3 PUFAs are essential fatty acids involved in a wide range of vital functions and processes in the body and are found in fish oil. Meta-analyses and literature reviews have shown that omega-3 PUFA intake is effective for reducing violent and aggressive behaviors. However, these favorable effects of PUFAs in the context of child maltreatment had not been examined previous. In Matsumura et al.’s study, they used data obtained from the ongoing nationwide epidemiological study JECS to examine the association between maternal intake of omega-3 PUFAs during pregnancy and risk of infant maltreatment.

Analysis using the lowest quintile of intake as a reference revealed that, even when controlling for up to 16 carefully selected potential confounders, the adjusted odds ratios (ORs) with 95% confidence intervals (CIs) for the three types of maltreatment tended to decrease as quintiles increased (Figure).

The precise mechanisms underlying this association remain unclear, but they may involve stress reduction, a lower prevalence of depression, and changes in infant behavior. One efficient method for ensuring sufficient intake of omega-3 PUFAs includes eating blue-backed omega-3 PUFA-rich fish, such as sardines, saury, and horse mackerel. Conveniently, blue-backed fish rarely have biological concentrations of toxic chemicals such as mercury and/or PCBs because they are small and are not at the top of the food chain.

JECS is funded by the Ministry of the Environment, Japan. The findings and conclusions of this article are solely the responsibility of the authors, and do not represent the official views of the Japanese government. 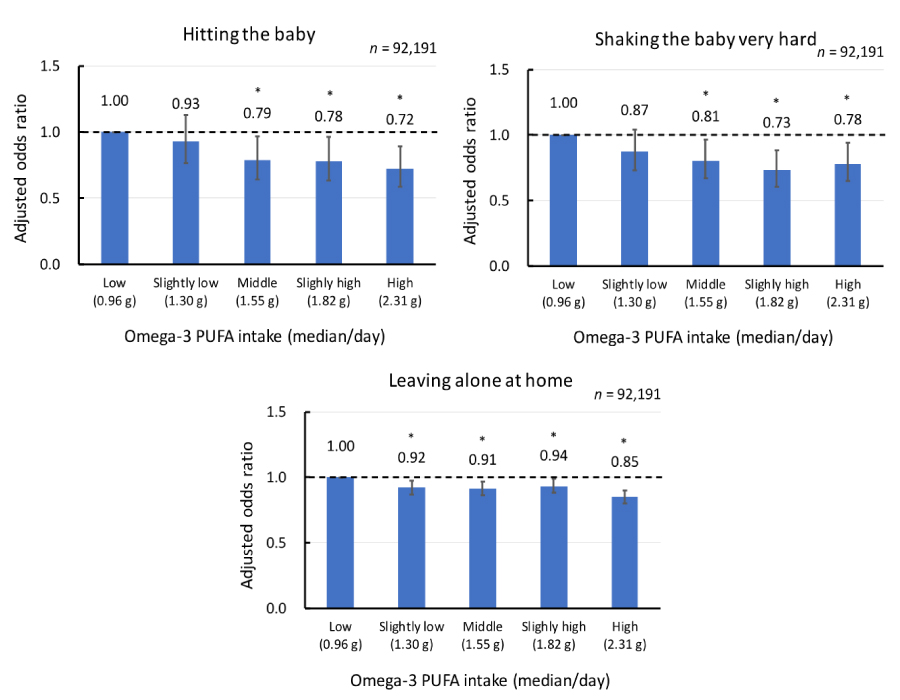 Figure. Odds ratios (95% CIs) for cases of infant maltreatment according to quintile for mothers’ intake of omega-3 polyunsaturated fatty acid (PUFA) during pregnancy.

Asterisks denotes significance, defined as the 95% CI not crossing the reference (=1.00).