The research group headed by Kiyoto Maekawa, Associate Professor, Academic Assembly, University of Toyama, and Christine A. Nalepa, Adjunct Associate Professor, Department of Entomology and Plant Pathology, North Carolina State University, with two young scientists, Hajime Yaguchi, Kwansei Gakuin University, and Itaru Kobayashi, The University of Tokyo, examined the mating system of the subsocial, wood-feeding cockroach, Cryptocercus punctulatus. The genus Cryptocercus has a sister-group relationship with all extant termites, and is an important group for helping to elucidate the evolutionary origins of insect eusociality. The team performed genotyping analysis using microsatellite markers previously developed (Yaguchi et al. 2017 Insect Sci), and clarified the social structure and reproductive strategy of C. punctulatus. Adults were found to be socially but not genetically monogamous, as nymphs in families were often the product of multiple paternities (Fig. 1). Present results are throwing doubt on the notion that high relatedness is required for termite eusociality to evolve; specifically, that social but not genetic monogamy may be a sufficient precondition for the transition to termite eusociality.

Fig. 1. Life cycle of Cryptocercus punctulatus. Newly molted adults search for partners, and can form temporary alliances during their maturational year; pair bonds are then formed prior to overwintering. These bonded pairs have only one reproductive episode, and produce oothecae during the summer of the year following maturation to the adult stage. Familial structure and parental care then continues in the dead wood nest for several years. Present results strongly indicate that some families contain offspring of not only the pair male (blue) but also one or more extra-pair males (red). The best possible timing of extra-pair copulation occurs from summer to autumn during the initial, maturational year.

Classically, the evolution of insect eusociality has been based largely on the genetics and life history of Hymenoptera. Wasps, bees, and ants are haplodiploid, so it has been argued that hymenopteran workers are as related to their sisters as to their own offspring, paving the way for altruistic behavior. More recent work of the last 20 years proposes that monogamy is a required precursor for the evolution of insect eusociality (e.g. Hughes et al. 2008 Science), but the idea is a current topic of debate. Termites are diplodiploid and do not fit into the classic hymenopteran model. The argument for the origin of eusociality in the termites largely has been that they are strictly monogamous, making families closely related, and tipping the scale in favor of altruism. Subsocial Cryptocercus cockroaches are unquestionably the sister group of all extant termites and the best model of the termite ancestor (Fig. 2A). Consequently, a clarification of the mating strategy of Cryptocercus cockroaches can be important for inferring the initial stages of termite social evolution.

Adult pairs of Cryptocercus cockroaches construct a tunnel and gallery system inside dead wood (Fig. 2B). The pairs have only one reproductive episode, and produce several oothecae (egg cases that contain many eggs) during the summer of the year after maturing to an adult (Fig. 2C). The familial structure and parental care then continues for several years. In this study, using 10 microsatellite markers previously developed for this species, genetic paternity was investigated in pair bonded families. The results clearly showed that many nymphs lacked alleles from the pair male in some families. Moreover, alleles different from those of the bonded pair were detected in the spermatheca of half of paired pre-reproductive females. To clarify the strategy of the pair bonded male, the team performed mate switching and surgical manipulation of male mating ability, and analyzed genetic paternity of the subsequent offspring produced in each family. The results support the idea that repeated mating by pair bonded males and females increases the number of nymphs he sires. 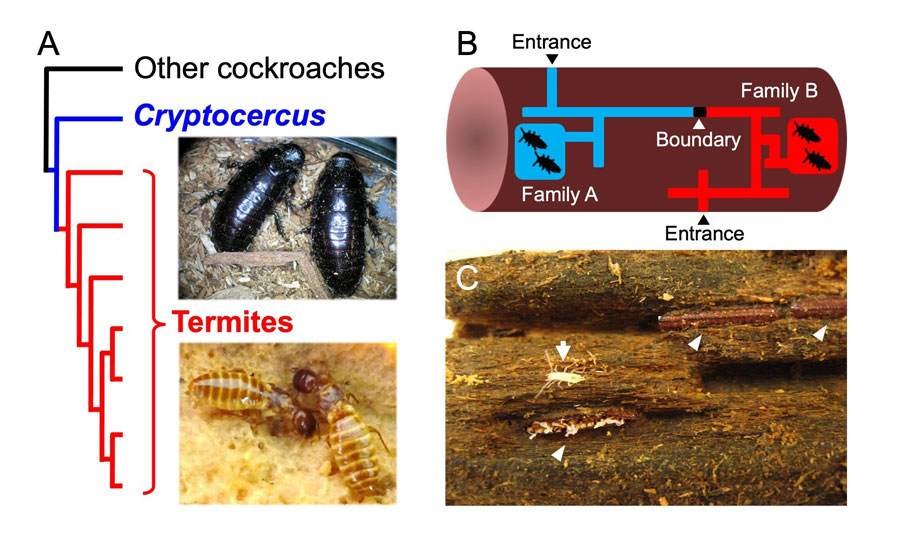 Fig. 2. (A) Phylogenetic relationships among cockroaches and termites. Adult pairs of Cryptocercus punctulatus (upper) and queen and king of Zootermopsis nevadensis (lower). (B) Nest structure of Cryptocercus cockroaches. Adult pairs build the tunnels and galleries in the dead wood. Multiple families sometimes colonize in the same wood, and normally separated by a structural boundary composed of wood chips and feces (modified from Fig. 1 in Nalepa 1984 Behav Ecol Sociobiol). (C) Three oothecae deposited on the wall in tunnel (arrowhead) and first-instar nymph just hatched from the lower left ootheca (arrow).

Genotyping analysis clarified the social structure and mating system of C. punctulatus; nymphs in family units are not always the offspring of the pair bonded male. Further investigation is required to clarify whether social monogamy alone can be a prerequisite for the evolution of termite eusociality.

This work was partly supported by a JSPS Grant-in-Aid for Scientific Research (JP16K07511 and JP19H03273 to KM) from the Ministry of Education, Culture, Sports, Science and Technology of Japan.