The research group of Dr. Shigeki Aoki, Prof. Kousei Ito, Ms. Saki Kuwahara (Graduate School of Pharmaceutical Sciences, Chiba University), and Dr. Takeshi Susukida (Institute of Natural Medicine, University of Toyama) investigated that individual differences in immune tolerance levels in humans are also important as a risk factor causing side effects of drugs, in addition to the phenomenon that drugs activate the immunity of the body. The findings will provide insights for identifying people who are susceptible to side effects of drugs. Furthermore, by advancing research in the future, it will help understand and predict the onset risk of adverse drug reaction in the drug development stage or clinical sites. This work was published online in Communications Biology on September 28, 2021.

The onset of side effects of drugs is associated with individual differences composed of a specific constitution (gene, etc.) and environment, and it is life-threatening in the worst scenario. It is extremely difficult to predict its risk during preclinical studies, and considered as a serious issue as it is often observed after a drug is on the market.

Previous studies have shown a strong relationship between side effects of drugs and specific alleles of the human leukocyte antigens (HLA)1), however, it does not occur in all subjects of a given HLA model population (Individual differences in side effects of drugs). For example, abacavir used for the treatment of human immunodeficiency virus (HIV), causes hypersensitivity reactions that manifest as a skin rash in HLA-B*57:012) carriers. Although several attempts have been made to understand the fundamental mechanism of the hypersensitivity in humans, it remained still unclear why only about half of HLA-B*57:01 carriers develop the disease. In the mouse model systems, drug-induced abnormal immune toxicity was successfully evoked but it failed to mimic clinically observed severe adverse drug effect. 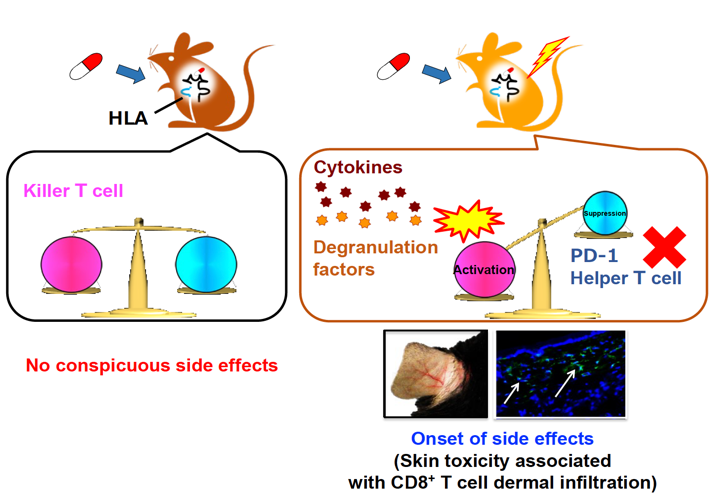 In this study, we first evaluated the level of hypersensitivity when abacavir was orally administered for a week to normal HLA-B*57:01 transgenic mice (the immunosuppressive system is working). As a result, immune activation was evoked, however any conspicuous drug-induced skin rash (side effect) was not observed. Meanwhile, the immune suppression system also functions in the drug administrated mice, including upregulated high expression of PD-1 on activated killer T cells (CD8+ T cells)4). In other words, the activation and suppression of immunity caused at the same time to maintain the immunity balance in the body, and thereby any conspicuous side effects were not emerged (left panel of the figure).

Next, in order to break down the immune balance, HLA-B*57:01 gene-introduced mice lacking PD-1 and helper T cells (CD4+ T cells)5) was prepared (the immunosuppressive system is disrupted), and the level of hypersensitivity symptom was evaluated in the same manner. As a result, activation of killer T cells associated with secretion of cytokines and degranulation factors6) was observed in the mice where the immunosuppressive system does not function, and conspicuous infiltration of these cells into the skin tissue were observed. Moreover, symptoms of drug-induced skin rash were also observed. These results suggest that the immune suppression system works defensively against the onset of side effects, and when it does not function normally, the immune balance is greatly inclined to the activation side, and side effects are more likely to occur (right panel of the figure).

Significance of the research and future prospects

Using the most representative combination of HLA-B*57:01 gene and abacavir, we have shown that people with the less immunosuppressive system (the broken immune balance) may be more susceptible to abacavir-induced skin rash, even when carrying HLA-B*57:01 gene. In other words, the level of not only the immune activation but also “immune suppression system” can be an important factor that causes “individual differences in side effects of drugs”. In fact, it has recently been reported that the severe drug eruption rarely occurs with anti-PD-1 antibody treatment, which may be due to the malfunction of the immunosuppressive system. Currently, our research group is further investigating with another combination of other drugs and HLA polymorphisms, in order to clarify the importance of the immunosuppressive system in the onset of side effects by medicines.

If future research can elucidate unclarified factors that determine the individual differences of the immune suppression system, findings will help understand the fundamental mechanism of association between “HLA + drug → onset of side effects”. Furthermore, it will be possible to predict potentially hazardous drugs or populations with a risk of causing side effects more accurately at the preclinical stage. In addition, if it becomes able to identify the population who have a constitution prone to side effects of medicines beforehand in the medical field, it will lead to prevent such people from receiving hazardous medicines and provide the safer medical care.

A protein on the cell surface that characterizes “self.” It functions as an important immune mechanism for recognizing self and non-self in the body, and maintains self-homeostasis by eliminating invading foreign substances (non-self) by immune function. In hematopoietic stem cell transplantation and organ transplantation, HLA type compatibility is important.

A type of HLA polymorphism, which a few percent of Caucasians carry. The onset risk of side effects in HLA-B*57:01 carriers has been reported in combination with several drugs, such as abacavir and flucloxacillin.

Molecules on the surface of immune cells that act as a brake to suppress the excessive function of immunity. Dr. Tasuku Honjo became famous for receiving the 2016 Nobel Prize in Physiology or Medicine for his achievements in discovering PD-1.

CD8-positive T cells with cell-killing ability. By recognizing non-self antigens presented by HLA molecules on the surface of virus-infected cells or cancer cells, they are activated to eliminate those cells.

CD4-positive T cells that act as a commander that regulates the function of other immune cells. While the majority of helper T cell belongs to the type that has the function of promoting the activation and differentiation of killer T cells, they also include “regulatory T cells” that brake excessive inflammatory reactions.

A small protein secreted by immune cells. By acting on target cells during immune/inflammatory reactions, proliferation/differentiation/cell death can be induced.

About this research project