With their study published on June 11 in Scientific Reports, researchers from five Japanese institutes demonstrated a method that could potentially expand the capabilities of synchrotron radiation, enabling researchers to control and probe electronic motion on the natural time scales of electron dynamics — attoseconds, or a few quintillionths (10−18) of a second.

“This new capability of synchrotron radiation not only helps scientists to study ultrafast phenomena in atomic and molecular processes, but may also open up new applications in the development of functional materials and electronic devices in the future,” said paper author Tatsuo Kaneyasu, a researcher at the SAGA Light Source, Kyushu Synchrotron Light Research Center in Japan.

The technique could trigger new insights and advances in applications like solar power generation and medical diagnostics, and bring a new level of precision to fields like photon and materials sciences where researchers wield very fine beams of X-rays to probe nanoscale structures of proteins and other molecules.

Synchrotron radiation is emitted when strong magnets bend the trajectory of relativistic electrons, which are traveling close to the speed of light. Scientists can increase the power of the emitted radiation by inserting a powerful light source called an undulator, which forces the electrons to bend on an even shorter radius. An undulator subjects the fast-moving electrons to a periodically alternating magnetic field in the scale of a few centimeters. The alternating field causes the orbiting electrons to oscillate harmonically and emit radiation at higher intensity and energy, with wavelengths on the nanometer scale.

Previous synchrotron experiments implied that by modifying the magnetic field of the undulator on the centimeter scale, scientists could control the properties of the radiation waveform in the nanometer or Angstrom scale. Up until now, this possibility had been dismissed, Kaneyasu said, because scientists had no way to tease out the individual waveforms buried in the noisy mixture of wave packets from synchrotron experiments.

But when the research team introduced two undulators in series, or a tandem undulator, they could distinguish and verify the generation of a waveform that exhibited a double-pulsed time structure — the signature of a tandem undulator.

“The optical method presented in this paper demonstrates that light wave packets having common double-pulsed waveform are emitted from individual relativistic electrons in the synchrotron light source,” Kaneyasu said.

The number of magnetic periods in the undulator determined the cycle number of the wave packet, and a phase-shifter magnet acted as a tuning knob for attosecond control of the delay between components.

“This is the first time the double-pulsed structure of individual wave packets has been directly verified by an optical method,” Kaneyasu said.

The study also reported the characterization of the time delay between the double-pulsed components in different wavelength regimes.

“The excellent agreement between the independent measurements confirms that a tandem undulator can be used to produce double-pulsed wave packets at arbitrary wavelength.” Kaneyasu said.

The researchers will be applying the ability to control waveforms to explore electronic process on the attosecond timescale, peering closer at ultrafast dynamics and interactions of a wide range of elements. 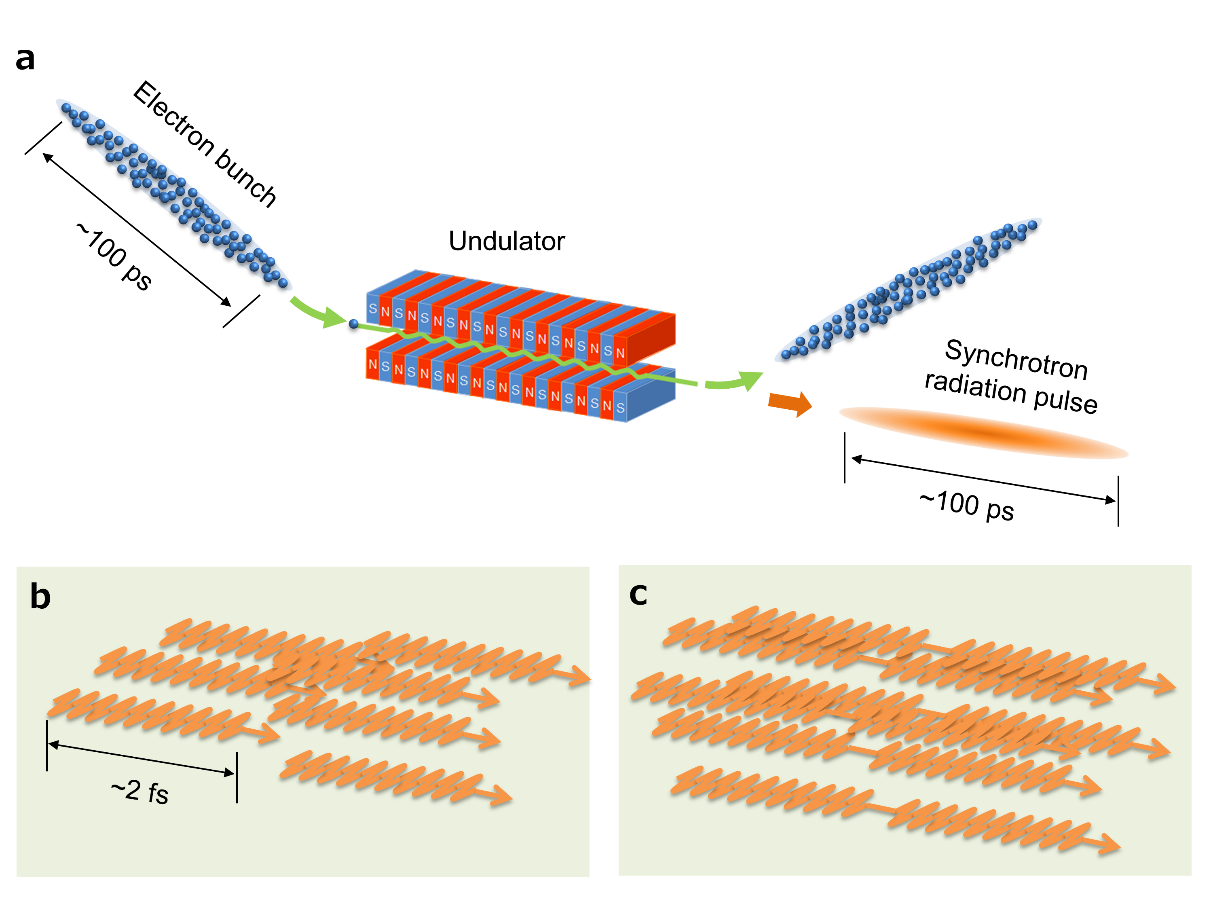 Image caption:Fig. 1. (a) Schematic diagram of synchrotron radiation by single-undulator. The temporal spread of the radiation pulse is determined by the spatial distribution of electron bunch. (b) The radiation pulse contains numerous light wave packets emitted by individual electrons in the bunch. The waveform of wave packet reflects the undulating motion of the electron in the undulator. Each wave packet oscillates only 10 times in two femtoseconds. (c) When a tandem undulator is used, each electron in the bunch emits a double-pulsed wave packet.

Image usage restrictions:News organizations may use or redistribute this image, with proper attribution, as part of news coverage of this paper only.

“Double-pulsed wave packets in spontaneous radiation from a tandem undulator”