Promoting retinal distribution of macromolecules/proteins by conjugation of a passport peptide, angiopep-2, evaluated with the new in vitro multicellular tools

Promoting retinal distribution of macromolecules/proteins by conjugation of a passport peptide, angiopep-2, evaluated with the new in vitro multicellular tools

In a recent issue of Journal of Controlled Release, Yamamoto et al. showed an increase in distribution of substances including proteins by linkage of angiopep-2 (Ang2), a cell-penetrating peptide. In this study, they established multicellular spheroids using in vitro cell lines which form the barrier between the circulating blood and retina. Utilizing the new in vitro tools, the transport manner of Ang2-conjugated substances was elucidated.

Background and overview of the research

The inner blood-retinal barrier (BRB) is formed by retinal capillary endothelial cells and supported by retinal pericytes and Müller cells. It has been known that this barrier strictly regulates distribution of macromolecules such as proteins/antibodies and oligos, to the retina. Recent studies have shown the promotion of macromolecular transport in the cells by conjugation of cell-penetrating peptides. It is hypothesized that the techniques of conjugating drugs with the cell-penetrating peptides help to increase retinal drug distribution, and thus contribute to drug development for the retinal diseases.

The authors performed the intravenous administration of green fluorescence protein (GFP) conjugated with Ang2 in mice. After the administration, GFP-derived fluorescence was observed in the mouse retina. Since GFP-derived fluorescence was not detected after the intravenous GFP administration, the promotion of the retinal distribution of proteins by Ang2 conjugation across the inner BRB is suggested. For elucidating the transport manner of Ang2-conjugated substances in the inner BRB, inner BRB spheroids were newly established using conditionally immortalized rat retinal capillary endothelial cells, Müller cells, and retinal pericytes. Expressional and functional evaluation of the spheroids implies that the inner side of the spheroids reflects the retinal side of the inner BRB. The transport studies of Ang2-conjugated substances with the inner BRB spheroids suggest that clathrin-dependent endocytosis/transcytosis is involved in the transcellular transport of Ang2-conjugated drugs/compounds across the inner BRB. In conclusion, the outcomes of this study indicate that the Ang2 linkage is useful for promoting retinal distribution of macromolecules via clathrin-dependent transcytosis at the inner BRB, thereby establishing retinal drug delivery systems. 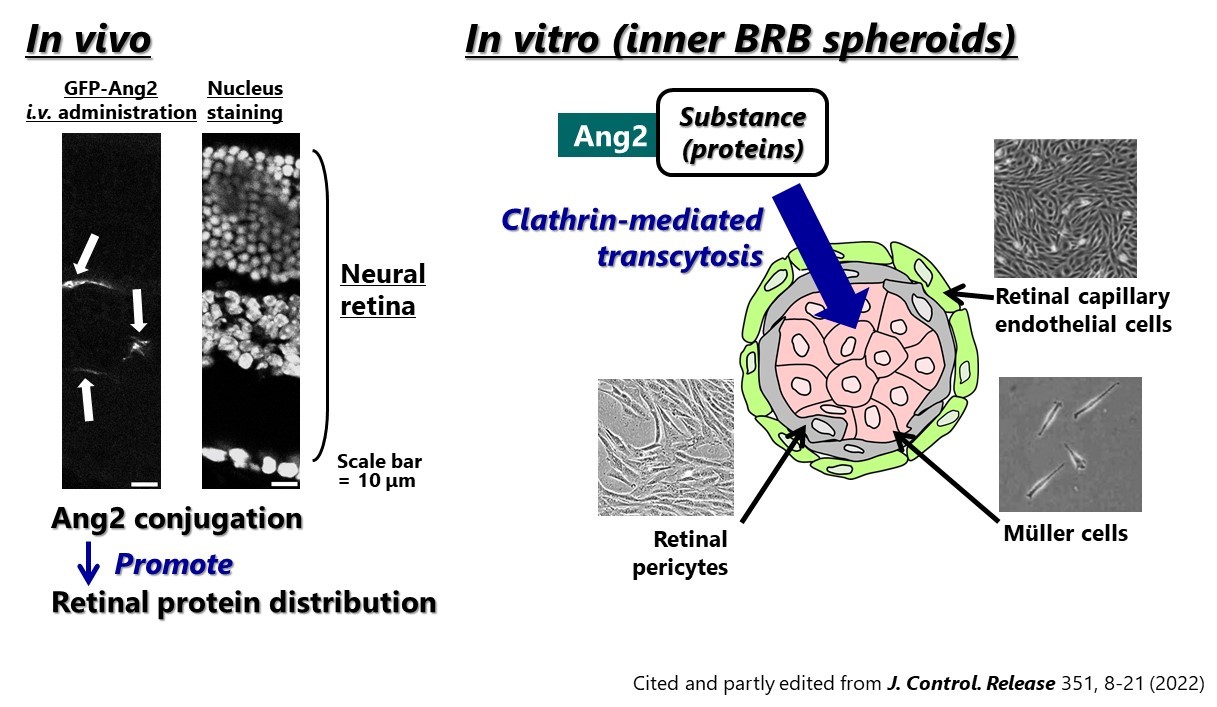