Submarine groundwater discharge (SGD) is widely recognized as an essential pathway for water and materials into the ocean and has demonstrated a significant contribution to the coastal ecosystem globally. However, its volume and chemical composition are vulnerable to ongoing global warming. In particular, fresh submarine groundwater discharge (FSGD) can be sensitive to changes in terrestrial freshwater in response to climate change. In Toyama Prefecture, it has already been reported that the amount of FSGD on the coast of Toyama Bay has increased by up to 30% with the decrease in snowfall and increase in rainfall since the 1980s. The average residence time of FSGD along the coast of Toyama Bay is 10 to 20 years, which is relatively shorter than the world average, suggesting that the material supply may be rapidly changing due to recent global warming. In this study, we took on the challenging work of sampling FSGD directly from the seafloor (Fig. 1) to evaluate the effects of warming on FSGD increases, groundwater and material fluxes, with particular attention to carbon and nutrients. 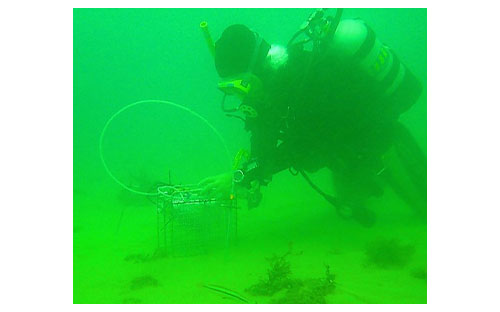 Summary and significance of the findings

The main results obtained in this study are as follows (Fig. 2):

(1) Current values of hydrogen and oxygen stable isotope in FSGD, groundwater, and river water during 2017-2021 were compared to historical measured values in 2001-2003, confirming the recharge elevation of the FSGD groundwater system has risen.

(2) Nutrient concentrations (NO3, SiO2, and PO4) in FSGD and groundwater decreased by ~30% with decreasing isotopic ratios. The percentage decrease in these concentrations was consistent with the percentage increase (~30%) in FSGD abundance in previous studies, thus suggesting that climate change (shift from snow to rain) has diluted dissolved components such as nutrients in the groundwater system associated with FSGD. Furthermore, tritium concentrations in FSGD decreased to the same extent, indicating that the water age of FSGD was reduced to 1/3 of its historical value.

(3) The supply of dissolved inorganic carbon from terrestrial areas to Toyama Bay increased by about 30% compared to 20 years ago. At the same time, a decrease in the average pH value of the entire FSGD-related groundwater system was observed. In addition, total nutrients in the river and FSGD decreased by up to 50% due to the reduction of nutrients in the estuary associated with climate change and the widespread use of sewage treatment facilities. Based on Redfield ratios, it was also suggested that net carbon uptake in the coastal zone has also decreased. Thus, dissolved inorganic carbon (excess DIC) in the coastal zone of Toyama Bay has approximately doubled over the past 20 years due to 1) increased direct carbon supply from the land to the coastal ocean and 2) decreased coastal primary production due to reduced nutrient supply. 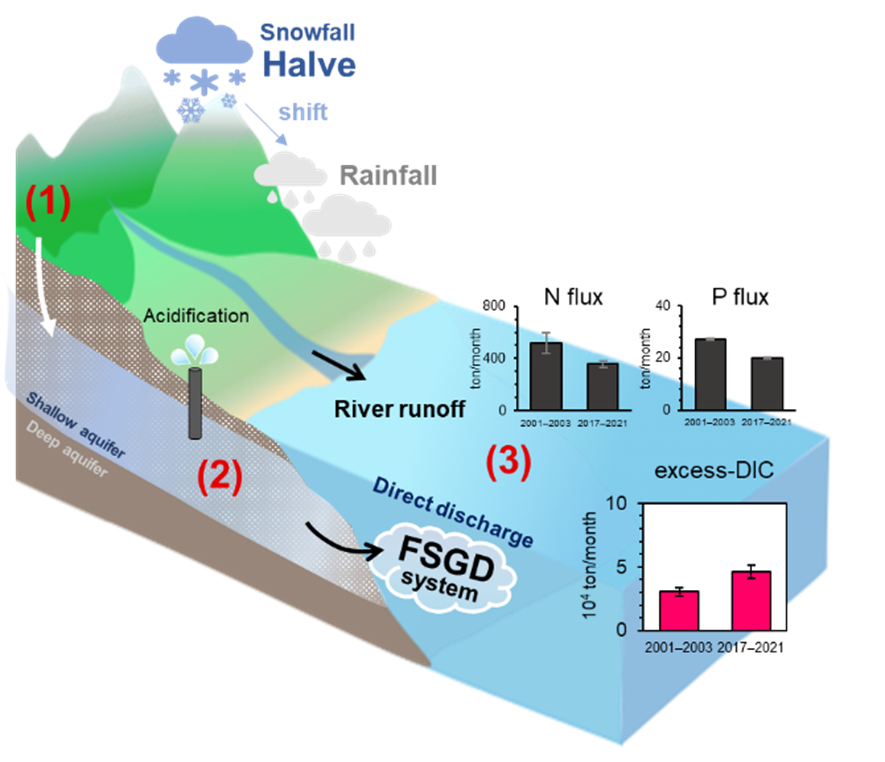 Fig.2 Overview of our conclusions

Our findings provide direct evidence, especially from the perspective of FSGD, of how sensitively the carbon budget responds to global climate change. They demonstrate the importance and even urgency of carbon-related FSGD research worldwide.

About this research project

This work was supported by the Environment Research and Technology Development Fund (JPMEERF20212001 and JPMEERF14S1130) of the Ministry of the Environment, Japan, a Grant-in-Aid for Scientific Research (KAKENHI) (20H04319, 15H00973, and 19310007), a Sasakawa Scientific Research Grant from The Japan Science Society (2018-7040), the Support Project for Japan Seaology Promotion Organization in 2016–2018 and 2021, ERAN’s Collaborative Research Project (Y-19-24 and Y-20-27), the cooperative research program of the Institute of Nature and Environmental Technology, Kanazawa University (18043 and 21039), Mitsumasa Ito Memorial Research Grant (R2-R11), and Joint Research Grant for the Environmental Isotope Study of Research Institute for Humanity and Nature.