The research group of Prof. Noritatsu Tsubaki (School of Engineering, University of Toyama) fabricate the strong metal-support interaction (SMSI) between sputtering reconstructed Cu and flame-made LaTiO2 support at a mild reduction temperature, exhibiting an ultra-stable performance for more than 500 h at 600 °C. The sintering of Cu nanoparticles is effectively suppressed even at as high as 800 °C. The critical factors to success are reconstructing the electronic structure of Cu atoms in parallel with enhancing the support reducibility, which makes them adjustable by sputtering power or decorated supports.

Cu-based catalysts have shown large reaction diversity and great potential in many industrial processes1, such as NOx removal in automobile applications, steam reforming, CO/CO2 hydrogenation, photo/electro-catalysis, and oxygen reduction reaction. However, their applications are seriously limited by the lack of sufficient thermal stability due to the nature of copper’s low Tammann temperature2, resulting in nanoparticles sintering via surface migration. This process will be further accelerated in the presence of water2. As reported, the traditional Cu–Zn–Al catalyst lost 70% activity in 15 h in reverse water gas shift (RWGS) reaction at 600 °C. As a result, the operating temperatures for those catalysts must be restricted, usually to below 300 °C, inspiring the rational design of anti-sintering Cu-based catalysts at higher temperatures.

Moreover, the strength of SMSI could be effectively controlled not only by reducing temperatures as before but also by tailor-made Cu via sputtering power regulation or decorated supports for rational catalyst design on demands. 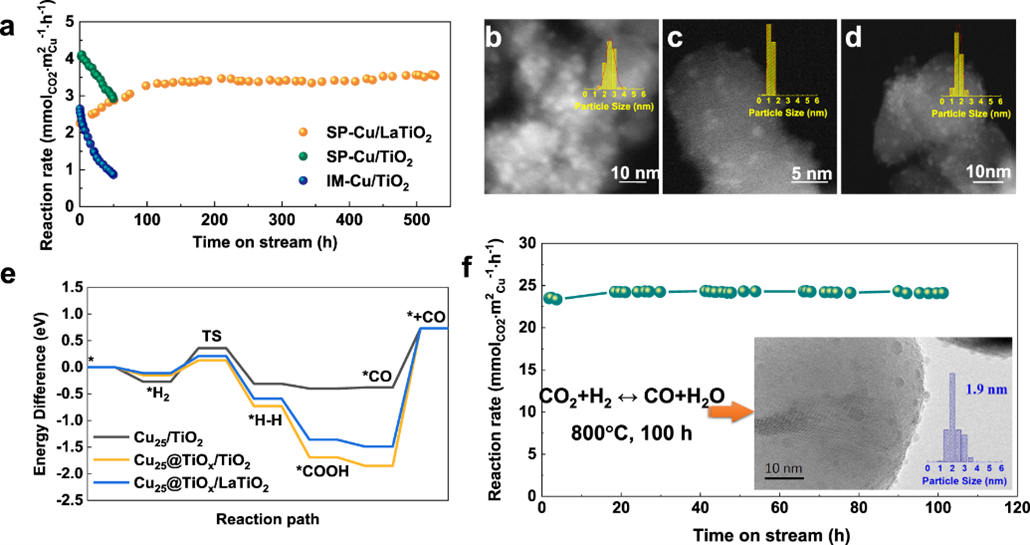 The present study provided a feasible strategy to establish an ultra-stable Cu-based catalyst at an ultimate temperature as high as 800 °C in a long-time investigation, which opened a new territory in the application of Cu in heterogeneous catalysis.