Background and overview of the research

Plant roots change their morphological traits in order to adapt themselves to different environmental conditions, resulting in the alteration of the root system architecture. To understand this mechanism, it is essential to visualize the morphology of entire root system. To reveal effects of long-term alteration of gravity environment on root system development, we have performed an experiment in the International Space Station using Arabidopsis plants, a model organism of angiosperms, and obtained dried root systems grown in rockwool slabs. Root system of Arabidopsis is composed of finer roots compared with typical crop plants and rockwool is also composed of fibers having similar dimension to that of the roots. A higher spatial resolution imaging method is required for distinguishing roots from rockwool. Therefore, we tested refraction-contrast X-ray micro-CT using coherent X-ray optics available at the beamline of the synchrotron radiation facility SPring-8 for bio-imaging. We have found that a wide field of view but with low resolution obtained at the experimental Hutch 3 of this beamline provided an overview map of the root systems, while a narrow field of view but with high resolution obtained at the experimental Hutch 1 provided an extended architecture of the secondary roots, by a clear distinction between roots and individual rockwool fibers, resulting in the successful tracing of these roots from their basal regions.

We can conclude that the spatial resolution of the observation at Hutch 1 is high enough to distinguish individual rockwool fibers as well as the secondary roots having the thickness of its isosurface model at 20.9 μm on the average. This enabled us to distinguish between them and to trace the architecture of the Arabidopsis root system including the secondary roots as well as the primary root. In addition, the observation at Hutch 3 provides an overview map of the root system grown in the rockwool slab for the purpose of screening specimens for further detailed analyses of individual root systems. This newly developed technique should contribute to elucidate the effect of microgravity on Arabidopsis root system architecture in space. 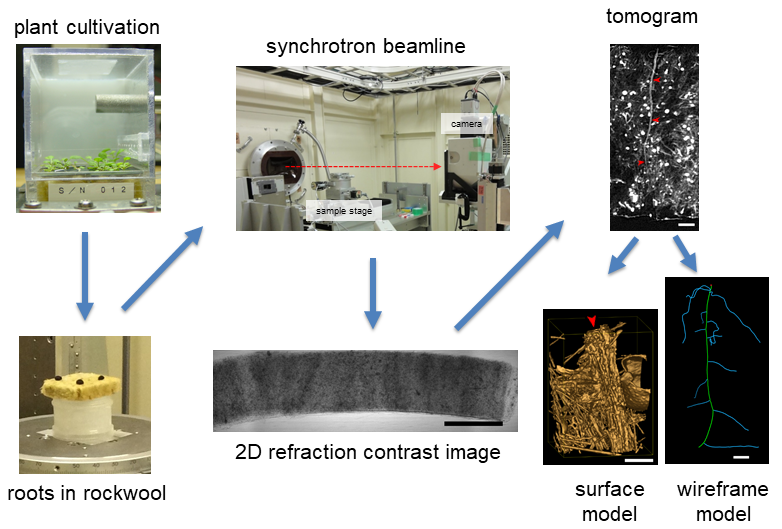